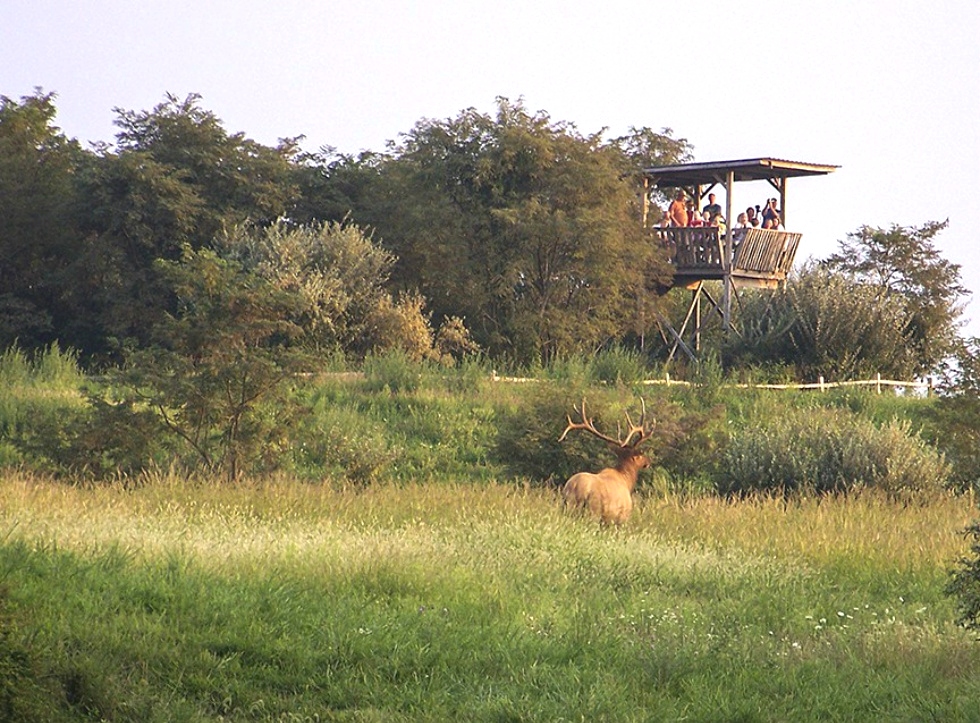 Thursday, Aug. 27, 2015, marked the 10th anniversary of the opening of the Hatfield Knob Elk Viewing Tower at the Sundquist Unit of the North Cumberland Wildlife Management Area in Campbell County. Since that date in 2005, thousands of wildlife enthusiasts have been able to consistently view the first wild elk herd to roam Tennessee since the 1860s.

‚ÄúThe reintroduction of wild elk in Tennessee and the construction and management of the viewing tower have been big successes for Tennessee in general,‚Äù says Mike Butler, chief executive officer of the Tennessee Wildlife Federation (TWF). ‚ÄúIt has been one of the most rewarding things I‚Äôve been involved with in my 19 years with TWF.‚Äù

Between 2000 and 2008, 201 elk were released by the Tennessee Wildlife Resources Agency (TWRA) on the Royal Blue and Sundquist Wildlife Management Areas. Butler says that most TWRA surveys now place the number of elk at around 600.

TWRA volunteer Terry Lewis ‚Äì a longtime TWF board member and current board chair ‚Äì and his wife, Jane, designed and purchased building materials for the viewing tower. The Lewises erected the structure with the help from volunteers of the Campbell Outdoor Recreation Association (CORA), TWF, the Rocky Mountain Elk Foundation, other volunteers, and TWRA personnel from Area 41, the Royal Blue Unit crew of the North Cumberland WMA, and TWRA elk biologist Steve Bennett. The Lewises still maintain the tower to this day and use their own equipment to plant and cultivate wildlife habitat and food plots.

‚ÄúThe elk viewing tower has been and continues to be a labor of love for us,‚Äù says Lewis, a business owner based in Knoxville. ‚ÄúIt‚Äôs been quite a lot of work, but totally worth the effort. Seeing these amazing animals back on native Tennessee soil is incredibly rewarding.‚Äù

A recent study conducted by the University of Tennessee at Knoxville concluded that the tower is visited some 16,000 times per year by a variety of both in- and out-of-state tourists, making a significant positive impact on the Campbell County economy.

THINGS TO KEEP IN MIND: During daylight hours, all users outside of an enclosed vehicle or outside of camp must wear, on the upper portion of their body and head, a minimum of 500 square inches of daylight fluorescent orange, visible front and back, during the deer gun and muzzleloader seasons.

Visitors to the tower are reminded to remain quiet while viewing the elk to avoid startling the animals.

SURVEY: After you spend a little time at the tower, please be sure to fill out the supplied surveys. This provides us with valuable information that will help keep the Hatfield Knob Viewing Tower the one-of-a-kind facility that its been for the past 10 years.

© Copyright 2021 - All images and content are the properties of their respective owners.